What makes you get out of bed on a Sunday morning and join strangers for a walk across a new city?

What I knew of Bangalore until then left me dissatisfied. I hadn’t yet broken the work – home – occasional round to the restaurants / movies loop of familiarity. Here was a chance to navigate a portion of the city and engage with it on my terms. The given route map for the walk was a loose boundary; I dove in and the experience was refreshing and enjoyable.

It’s interesting how the name ‘Russell’s Market’ gets associated with the surrounding area. So when my autorikshaw driver announced at a crossing of roads, “Ide Russell’s Market (This is Russell’s Market),” I asked him to drop me at the market’s main entrance which was slowly waking up to business on a Sunday morning.

Our group had occupied most of the entrance space with some of us leaning on the cattle gate, some making space amidst the two wheelers parked and every now and then we gave way to men carrying huge bundles of vegetables from tempo trucks into the market as Nithya, our walk co-ordinator briefed us about the route.

We commenced our photo walk by entering the market building, an old world charm reflecting British built structure that looked like a fortress from the outside. As we dispersed into the many alleys it had to offer, one heard conversations in Tamil and Telugu as people huddled up to catch up on the early morning gossip. I wandered along as my body took in a plethora of smells, colours, sounds and tastes that came from the fruits, flowers, meat, people and the structure itself. The initial attempt at selling their goods to us having borne no fruit, the vendors settled back to the task of arranging their stalls, some ignoring our groups’ movements, others compelling us to click their photographs.

The area between Russell’s market and St. Mary’s Basilica houses plenty of stalls; some had a table with wheels set up (thela), some sold their merchandise out of baskets squatting down on the road and a few others innovated by attaching their baskets behind bicycles for increased mobility. Most vendors knowing well the nature of the street, chose to settle under the shade of the trees, some others propped up umbrellas to protect themselves and their goods. Everything ranging from the shiny multi-coloured wind mill toys, trinkets, artificial jewellery to luscious fruits and fresh flowers got sold here; but a man selling neon pink candy floss packets, deftly arranged in a cylindrical tower taller than any human around caught every camera’s lens for sure. 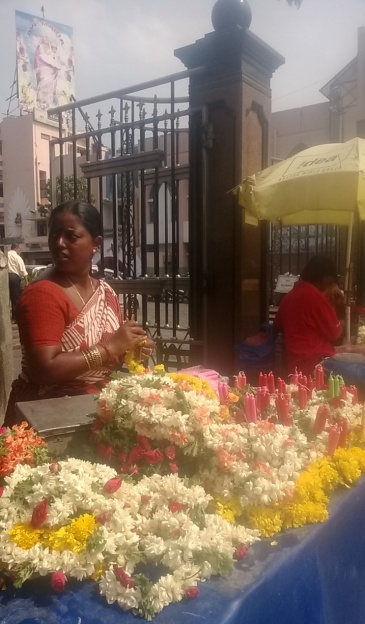 As one neared the premises of this Roman Catholic Basilica, the nature of the stall products changed from random to specifically religious, mostly women selling candles decorated with a string of flowers around and miniatures of different body parts made in thin sheet metal as an offering. A few activists patrolled the entrance gate with a donation box in their hands and distributed pamphlets. The Basilica complex also included a marriage hall and dozens of shops that sold religious merchandise.

With the fragrance of flowers and incense sticks, the idol of Mother Mary draped in a brocade saree, the choir music sounding melodiously south Indian, the loud greetings addressed to one another and with groups that waited for their friends to join them; I wondered if there was much difference in the myriad places of worship that this country offers.

My doubt was immediately cleared at our next stop, the St. Andrew’s church. A Presbyterian church having a red Gothic building hidden behind dense green foliage; the complex boasted of a lot of trees and parked cars, was less noisy and the choir music sounded like Simon and Garfunkel’s, Scarborough Fair.

Both the church complexes have ample space preceding the church building, but they are used quite differently. While St. Mary’s Basilica announces its presence more strongly in its viscinity in the form of shops and hoardings, St. Andrew’s Church prefers to be discovered by people wanting to visit it. One feels good to know that Bangalore offers both varieties of religious public spaces; one that makes you believe the city is alive with all its hustle and bustle, while the other lets you enjoy a quaint and peaceful ambience.

The other places that we crossed were the Shivajinagar bus stop, the Police Canteen outside which people with passes stood in a queue to enter and the Parade ground where entry was restricted, but thanks to a low boundary wall, one got to see the military men exercising. We also passed under the Bangalore Metro rail, and walked on the pavement next to the Hard Rock Café, a heritage building converted beautifully into a swanky café.

The walk ended at the Koshy’s ice cream parlour with Mr. Koshy himself speaking to us on how Bangalore proved to be an interesting backdrop for his childhood days and how his coffee shop and he, have stood witness to the changes that this city has faced in the decades that followed. The framed caricatures of Bangalore by Paul Fernandes exhibited at Koshy’s inspired me to go visit the exhibition at the Goethe Institut by the same artist for his book – Bangalore swinging in the 70s.

This walk changed my mindset about the city, showing me its beginnings, its cultural diversity. I now look at Bangalore in a new light and plan to be involved with it at a more intimate level than before.