Where is YOUR Chennai?

Where is YOUR Chennai? from Urban Design Collective on Vimeo.

One afternoon during the last week of November, I received a call from the editor at The Alternative.in. She insisted that UDC be a part of their upcoming edition of Green Bazaar- an all-day sustainability experience carnival to bring conservation into focus- scheduled for 7th December in Chennai. It was a stretched-to-the-limit phase… we were in the middle of preparations for the upcoming puppet theatre workshop in Pondicherry and the launch of the ‘Sidhpur Stories’ exhibition in Dakshinachitra. I told the editor that it was rather short notice but that I would try figuring something out… perhaps do a repeat of a previous installation. A day later, I looked up their website to see what the bazaar was all about. That’s when I knew exactly what had to be done.

‘Where is YOUR Chennai?’ is an installation conceptualized and presented at the 2nd edition of Chennai’s Green Bazaar on 7th December, 2014 at Spaces in Besant Nagar. 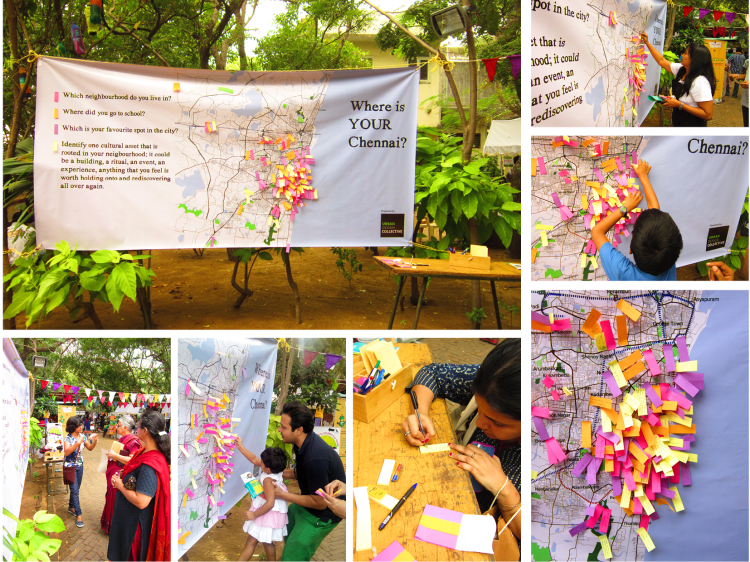 Premise
The 2nd edition of Chennai’s Green Bazaar was themed around conservation- ‘an effort to rediscover and savour traditional forms of knowledge in any form and hold onto what we know, and rediscover it, all over again. More importantly, the bazaar seeks to do this by sharing a few new stories around conservation with its passionate citizenry.’
‘Where is YOUR Chennai?’ is an installation conceptualized to enable just that.

About the installation
The installation involved a large printed map of Chennai held taut between two posts.
Participants were asked to place different colored post-its on the map in response to the following questions-
Pink post-it : Which neighbourhood do you live in?
Orange post-it: Where did you go to school?
Purple post-it: Which is your favourite spot in the city?
Yellow post-it: Identify one cultural asset that is rooted in your neighbourhood- it could be a building, a ritual, an event, an experience, anything that you feel is worth holding onto and rediscovering all over again.

The installation is based on ‘Community Asset Mapping’ as a process intended to mobilize a community to focus on what matters most by identifying and using its assets. Community asset mapping can lead to informing policies and activities through the creation of a ‘map’ of the community’s resources as perceived by the community itself. Participants were asked to map and explain the significance of what they perceive as cultural assets of their own neighbourhood in the city.The results from the session are meant to identify key cultural assets at the scale of the neighbourhood as well as ideas and opportunities to improve them.

This mapping exercise was coupled with the Neighborhood Postcard Project, a worldwide initiative sprouted from the SF Postcard Project in San Francisco to foster community connection through storytelling exchange. Following the mapping, participants were asked to fill out a postcard with a positive personal story of their neighbourhood/ community. That postcard was then mailed to a random person in the city to create a stronger connection between people and neighbourhoods. A hat tip to Hunter Franks, founder of the Neighbourhood Postcard Project; ‘Where is YOUR Chennai?’ felt complete with this addition.

The entire installation hinges on the notion that there are many positive stories that exist in the many neighbourhoods that sum up the city of Chennai and these stories need to be heard. Its title ‘Where is YOUR Chennai?’ is also an attempt to urge the participants to personalize the city for themselves while they are a part of the installation.

Outcomes
Firstly, we were overwhelmed with the response. Almost everyone who came to the bazaar wanted to be a part of the installation! The age group of participants ranged from 6 to 60. And towards the end, it was selfies galore with the colourful installation as a backdrop! Because the venue was in the southern part of Chennai, most of the representation on the map too was from that part of the city. So the mapping turned out to be a bit lopsided and repetitive in content as well, but this was something I expected at the outset. It only reinstated the fact that we now need to repeat this installation at other venues in order to get a comprehensive mapping. However, there were those rare gems that did emerge and we learnt more than a thing or two about the various neighbourhoods of Chennai. We are still in the process of collating the findings and I will shortly share them in a subsequent blog post.
In some sense, it felt like the folks who participated shared a little secret about their neighbourhood with us. That’s what exchanges are all about. They are personal and they are about trust. And that, to me, was the real success of the installation.

For more photographs, do visit our album here.

Vidhya Mohankumar is an architect and urban designer with over a decade of work experience in India, Ireland and the United States and a passion for creating livable cities. She is the founder of Urban Design Collective (UDC), a collaborative platform for architects, urban designers and planners to create livable cities through participatory planning. Vidhya also advocates sustainable development through training and capacity building programmes for various stakeholder groups and also within academia through her association with a number of universities as guest faculty. In other parallel albeit real universes, she is a wishful artist, an avid wanderer, a constant gardener and a newly enthused cook.
View all posts by Vidhya Mohankumar »
« 268 – Urban Design Word-a-day- Transit
269 – Urban Design Word-a-day- Transit Boulevard »

4 thoughts on “Where is YOUR Chennai?”