The third edition of the Urban Colloquium was apparently a blockbuster. Our venue was packed. Literally packed. 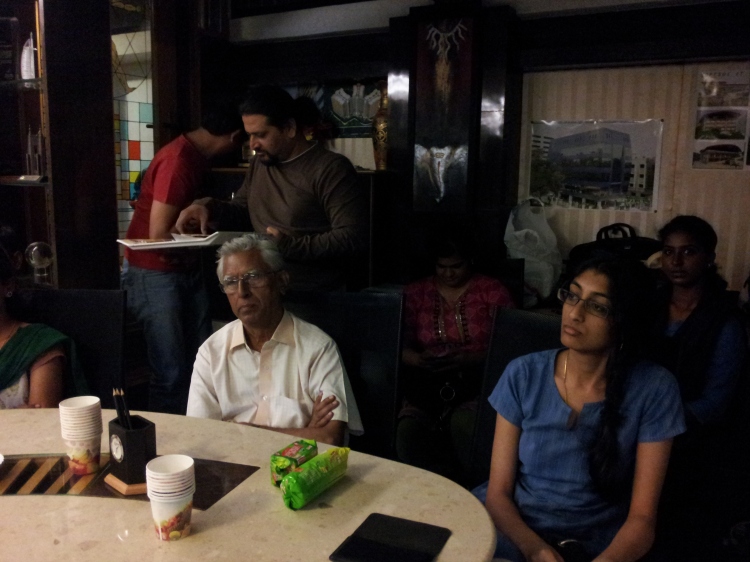 Either way, it was a fabulous evening and that’s just about the only thing that matters.
Our speaker, Jayakumar Baradwaj is among numerous other things the founder of Prastara, a public charitable trust desperately trying to save our precious and fast disappearing heritage. Over roughly 45 minutes, he transported us to the wonderland of the Chola and the Pallava dynasties and brought to life so many mythological tales through a mere set of photographs showcasing sculptures/ panels from the temples of our land. He spoke about the alluring charm of iconography manifested in abundance in our temples and the dying skill of epigraphy- deciphering and reading inscriptions. He spoke about the trigger that drew him to Prastara’s mission and ended his talk with a call to action to protect our heritage and a briefing of the various activities that Prastara is onto especially educating school children towards the cause. He also announced that they were planning field trips to Kanchipuram and other places for this year and that anyone was welcome to join him for a live tour of the wonders of the region. Look out for announcements on their Facebook page.

We also had an additional agenda this time around with the colloquium. Prastara and UDC have just commenced work on a new collaborative project. We’re looking to map out Kumbakonam, its past and present; its built, natural and intangible heritage. A team of us, Jayakumar, Jothivel Moorthi (Prastara trustee) and yours truly went on a recce visit to Kumbakonam the weekend of 28-29 March. Though we weren’t able to photo document much of the town that weekend thanks to the election campaigns in full swing, we managed to meet quite a few residents who have lived in Kumbakonam across generations. After Jayakumar finished his talk, we jointly briefed the audience about this new project and opened the floor for suggestions/ comments for a way forward. Since we’re still in the process of creating a brief for the project, it was useful to have everyone share their thoughts and ideas on how we could shape this initiative. We were rather overwhelmed with the many people who offered their time on the project and asked to be informed of the next planned trip to Kumbakonam. If we all make it, it’ll be a bus load of us out there!
Like I said, it was a fabulous evening. And again, write to us if you’d like to know more or would like to offer your support/ time/ ideas/ money for the Kumbakonam project.

Vidhya Mohankumar is an architect and urban designer with over a decade of work experience in India, Ireland and the United States and a passion for creating livable cities. She is the founder of Urban Design Collective (UDC), a collaborative platform for architects, urban designers and planners to create livable cities through participatory planning. Vidhya also advocates sustainable development through training and capacity building programmes for various stakeholder groups and also within academia through her association with a number of universities as guest faculty. In other parallel albeit real universes, she is a wishful artist, an avid wanderer, a constant gardener and a newly enthused cook.
View all posts by Vidhya Mohankumar »
« In honour of Frederick Law Olmsted’s 192nd birthday
084- Urban Design Word-a-day- Global City »