The Irony of the Public Toilet

As I ponder over the significance of having proclaimed such a day, my lunchtime internet browsing session threw up two links. And both did a pretty good job of unsettling me, albeit in very different ways.

The first is a feature from Down to Earth magazine’s online portal. It reports among other things that inadequate sanitation has economic impacts across sectors like health and tourism and costed the country 53.8 billion USD in 2006.* Also, that half of India’s population defecates in the open and in all probability, will continue to do so for the next 10 years.

Cost of inadequate sanitation in India 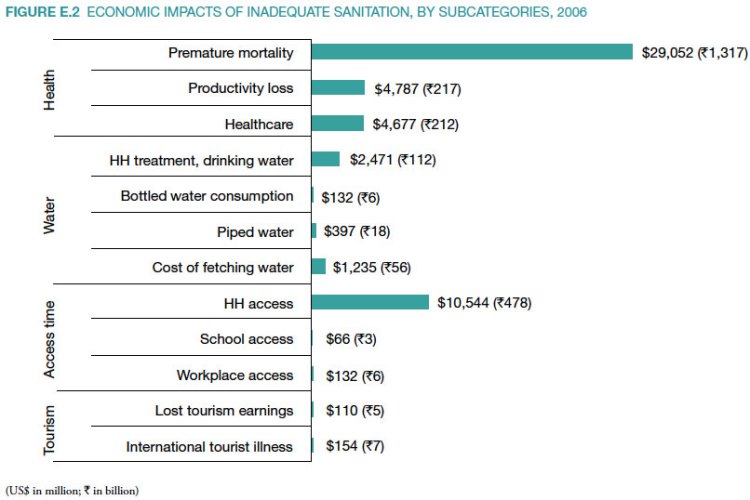 Source: Report titled Economic Impacts of Inadequate Sanitation in India was released by the Water and Sanitation Programme, a multi-donor partnership programme administered by the World Bank to support people in obtaining affordable, safe and sustainable access to water and sanitation services.

The second is a link [1] that showcases Japanese architect Sou Fujimoto’s design for a public toilet in Ichihara City, Japan. To quote from the link itself, “taking the picturesque location into consideration, the Japanese architect has conceived two units–one for unisex use and people with disabilities, the other for ladies only–that merges the notions of public and private, opened and closed, nature and built architecture, and smallness and largeness.” Here are a few pictures-

Something about these two stories just didn’t feel right.

Vidhya is a reserved architect and an impassioned urban designer with over a decade of work experience in India, Ireland and the United States. She has also been teaching as a guest faculty at various institutions since she returned to India in 2008. In other parallel albeit real universes, she is a wishful artist, an avid wanderer, a constant gardener and a newly enthused cook.

Vidhya Mohankumar is an architect and urban designer with over a decade of work experience in India, Ireland and the United States and a passion for creating livable cities. She is the founder of Urban Design Collective (UDC), a collaborative platform for architects, urban designers and planners to create livable cities through participatory planning. Vidhya also advocates sustainable development through training and capacity building programmes for various stakeholder groups and also within academia through her association with a number of universities as guest faculty. In other parallel albeit real universes, she is a wishful artist, an avid wanderer, a constant gardener and a newly enthused cook.
View all posts by Vidhya Mohankumar »
« PBBC Chennai Event Reminder- Parasitic Cities: A Workshop for Students of Architecture
Sunday morning at the Madras High Court »